WHAT IS GEOTHERMAL ENERGY?

Geothermal heating and cooling systems use the clean, renewable energy in your yard to save homeowners up to 70% on heating, cooling and hot water.

Called “the most cost-effective, energy efficient and environmentally friendly method” of heating and cooling your home available today by both the Environmental Protection Agency and Department of Energy, geothermal systems provide a proven, reliable, and safe way to heat and cool your home or office and are available virtually anywhere.

How does a Geothermal heating and cooling system work? Outdoor temperatures fluctuate with the changing seasons but underground temperatures don’t. Four to six feet below the earth’s surface, temperatures remain relatively constant year-round. A geothermal system, capitalizes on these constant temperatures to provide “free” energy.

The ground is able to maintain a higher rate of temperature consistency because it absorbs 47% of the suns energy (heat) as it hits the Earth’s surface. Geothermal systems are able to tap into this free energy with an earth loop. This technology is then used to provide your home or office with central heating and cooling.

HEATING MODE: In winter, a series of fluid filled underground pipes called a “loop” absorbs stored heat and carries it indoors. The indoor unit compresses the heat to a higher temperature and distributes it throughout the building.

COOLING MODE: In summer, the system reverses, pulling heat from the building, carrying it through the earth loop and depositing it in the cooler earth.

Unlike ordinary systems, geothermal systems don’t burn fossil fuel to generate heat; they simply transfer heat to and from the earth to provide a more efficient, affordable and environmentally friendly method of heating and cooling. Typically, only a small amount of electricity is used to operate the unit’s fan, compressor and pump. 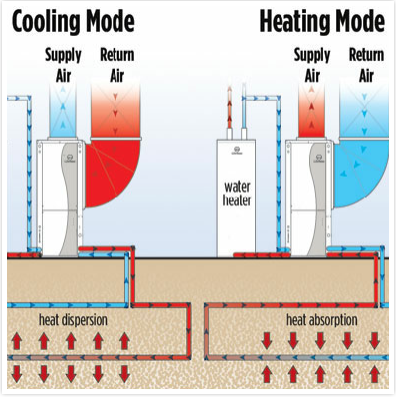 Geothermal heat pump systems allow for design flexibility and can be installed in both new and retrofit situations. Because the hardware requires less space than that needed by conventional HVAC systems, the equipment rooms can be greatly scaled down in size, freeing space for productive use.

Often used when adequate land surface is available. Depending on geothermal system needs and space available, pipes are placed in trenches that range in length from 100 to 400 feet.

The ideal choice for a geothermal heat pump when available land surface is limited. Well drilling equipment is used to bore small-diameter holes from 100 to 400 feet deep.

Very economical to install when a large body of water is available for use by the geothermal heating and cooling system. Coils of pipe are simply placed on the bottom of the pond or lake to capture the geothermal energy.

In ideal conditions, an open-loop application can be the most economical type of geothermal system. These use groundwater from a well as a direct energy source. 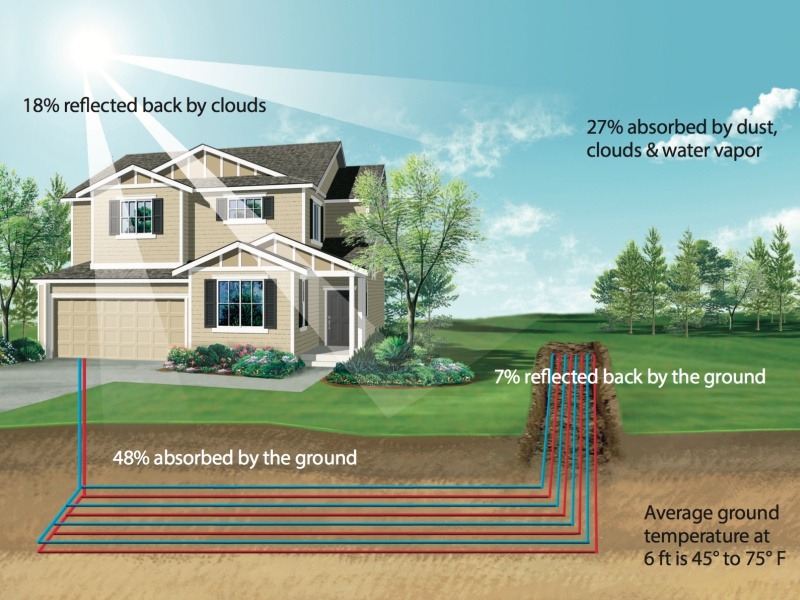